News about Jammu Kashmir posted by me, friends and dear reader good news for Jammu and Kashmir people and Indian people.
In an announcement with massive repercussions for Jammu and Kashmir,home minister amit shah has announced in rajya sabha that the government has decided to repeal article 370 of the Constitution which grants special status to Jammu Kashmir. The government has also decided to bifurcate the state into two unions territories Jammu and Kashmir,which will have a legislature and Ladakh, which will be without a legislature. 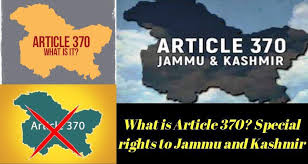 Shah’s announcement was immediately followed by massive uproar in the upper house with opposition MPs protesting in the well of the house. Back in the valley three of Jammu and Kashmir most prominent politician mehbooba mufti,omar Abdullah and sajjad lone are under house arrest amid a massive security built up in the state. Internet services and mobile services have been suspended in several places and all public gatherings are banned in Srinagar district as section 144 was imposed from midnight.
As per the order there will be no movement of public and all educational institutions shall also remains closed. There will be a complete bar on holding any kind of public meeting or rallies during the period of operation of this order.
After the Jammu and Kashmir administration curtailed the amarnaath yatra and asked pilgrims and tourists to leave the valley at the earliest on Friday, anxious residents continue to throng markets to Stoke on essential and serpentine queues have been visible outside shops and fuel station.
The anantanaag district administration, in view of panic stocking, ordered all fuel station dealers not to sell petrol or diesel without permission from the district magistrate or an authorized officer.
The parties on Sunday unanimously resolved to fight any attempt to abrogate the constitutional provision that guarantee it special status or any move to trifurcate the state or unconstitutional delimitation, nc leader Farooq Abdullah said.
The meeting was also attended by mehbooba mufti, omar Abdullah, taj mohiuddin, muzaffar being, sajad lone and Imran Ansari, shah faesal and MY tarigami.
Click the more information: